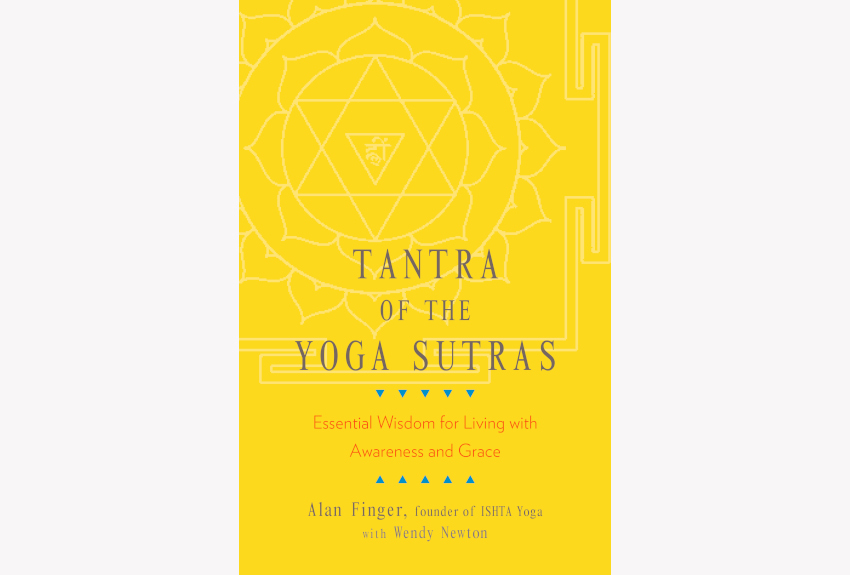 Tantra of the Yoga Sutras is available now at all on-line outlets.

Order Tantra of the Yoga Sutras via Amazon, Barnes & Noble, Indiebound, Shambhala or wherever good books are sold.

Peter: Alan, I’ll start with you. Where did the Tantra of the Yoga Sutras come from?

Alan: Well, everything is born from nothing.

P: So it came out of nowhere?

A: Yes. And also from my experiences in the ISHTA teacher training, where we were teaching the Sutras from other translations. I was consistently frustrated by listening to students get confused because the translations usually focus on religion and ethics. I was taught, and I intuitively knew, that this was was not actually what the book is about. The Sutras talk about the science of being in the Now, and that can only happen if you can go beyond the thoughts. Because when the mind is still, you can perceive something else. And so whenever students in the teacher training would get caught up in questions of religion and ethics, I always thought, this is wrong, we’re making it so hard for them to understand. So one student, Elizabeth Marks said, why don’t i send you a sutra a day. You can interpret it, and I’ll record them for you. So we did that, and we got them all down in rough form, and finished it. And then I thought, if I want to make this into a real book, I need someone who is adept at language and philosophy and who had the pitta to be able to properly do the project, so I called Wendy. Wendy has that focus, and she could do it, and she did it. A lot of the time we disagreed, but the process helped her grow, and it was part of the process of writing the book.

P: Wendy, can you describe the process?

Wendy: Well, it took the form of sometimes a teaching, sometimes a conversation, and sometimes a debate. We would sit and talk about a section of text. Alan would talk about it to me, I would ask questions, take notes and then go off and write something. When I would come back the following week and read to him what I had written, he would get this look on his face like he was listening from the top of a mountain.

W: Yes, that’s for sure. After a while, we got into a groove. Alan would be doing his samyama, listening to me reading what I had written. He wouldn’t even have to say anything, and I would suddenly know, oh, that’s off, and I’d start to self-correct as we went along. He would just sit back and smile. But it only worked if we were sitting at the table together. Once in while, as I read, he’d zoom in and say wait, read that part again. And it would be a major teaching point. This went on for years as we worked through the padas. Every once in a while it would become a debate because he was having trouble getting a point through to me. Once at Christmas time, I was at my mother’s house. Al and I had been working through a particularly tricky and important part in samadhi pada having to do with the stages of samadhi. I wanted to finish the section before the break so that I wouldn’t lose track of where we were. My family was milling about drinking egg nog and brandy, and I was on the phone with Alan reading him what I had written. He said something that finally made it all drop into place. I was like, I can’t believe I never saw that before. The point of focus IS the jivatman! I had to go rewrite a whole section before Christmas dinner. My teacher just kept reflecting for me how my complex thinking was keeping me from understanding, and eventually my mind started making the adjustment on its own so that I could see beyond my thoughts to what he was holding out for me. The writing came right out of my own yogic process.

P: Al, it sounds like there was something about the debating that made it clearer for you.

A: Well, I had my idea, and her debating it was when she wasn’t getting it, so I’d have to look again and find more depth to it. And slowly, it started to evolve. It would needle me, and I would have to deal with her mental process. But that’s why I wanted her there, to give that opposition so that we could really refine it until we got the concepts clear. The amazing thing was to see that Wendy would change once she got it. There were remarkable changes in her. So, this was a real teaching that went on, rather than just writing a book.

P: Wendy, how did you guys come up with the idea for the commentary and the layout of the book?

W: Alan wanted to keep it very simple. He understood that the book formed a kind of what I would call a poetic narrative, and he wanted to show them that in a very clean way. So we developed a kind of map that they could refer to as they went along without breaking the flow of understanding and getting off track. Usually, readers either take one sutra out of context with no way to understand it or get lost in a long story in the commentary, forgetting what the sutras are saying. Al’s vision was that Patanjali is a yogi speaking about yoga and following an internal logic, not all of which is explicit. So we figured out a way to keep people clued into the context.

A: We systematized it. Some of the sutras do stand alone, but many of the others depend on what went before or comes after. So, we thought, let’s compile it in that way. We put the sutras into sections and gave them headings so that people could follow. So, instead of grasping for something to say that would add more confusion, we gave it a structure that could help people stay connected to the meaning.

W: We settled on an elegant system of short commentary sections, side bar notes, and simple consistent terminology. I think it does help people to stay connected to the meaning of the sections.

P: In many translations, the Sutras gets fuzzy and short in the 3rd and 4th pada. This seems to be a difference in your interpretation. Can you say a little about that?

A: In the “ashtanga,” or the eight limb system, the last three limbs — dharana, dhyana, and samadhi — are actually in the third pada, not the second pada. This shows us that meditation is part of how we channel inspiration and lightness from samadhi back into our living. Patanjali was trying to paint a picture that there is this state of consciousness that is not of matter and maya — which is the topic of Peter and Al’s soon to be published book — and how if we really are in that state, we could actually walk through a wall. The siddhis are examples that show what the possibilities are when you master channeling the subtle energy of samadhi through the chakras and elements.

P: The title of the book is Tantra of the Yoga Sutras, and it seems to me that it’s in the vibhuti pada that you’re making the connection that you’re not just trying to get out of here and have a divine experience, but that this divine experience influences your living.

A: The experience continues into your living and then in kaivalya pada, we see how when that happens continuously, it allows you live life effortlessly and gracefully.

W: That is really the difference between a more traditional vedantic reading, and a tantric one. Tantra really puts the emphasis on the whole cycle. You do sadhana to expand beyond your patterns in order to return to your life with an expanded perspective. This changes how you live out your karma. It makes so much sense to me that Al understands the third and fourth pada this way and spends so much more time on them, seeing as how he is a tantrika himself!

A: And that’s why I say that Patanjali was a tantrika. He didn’t just say go into a cave and stay there. He said do these things and then live your life and work out your karma. Here’s how yoga can help you do that most gracefully. Because just in a cave, you’re not necessarily going to work out your karma.

P: And this is also in the ISHTA lineage. Bharati came to that same conclusion and came out of his cave.

W: I think we’ve all left the cave.

A: He needed to work out his karma by sharing what he got in the cave.

P: Well, I’m very excited that you’re sharing this work through this book, and I know that many people are excited about it, and many will benefit from reading it.