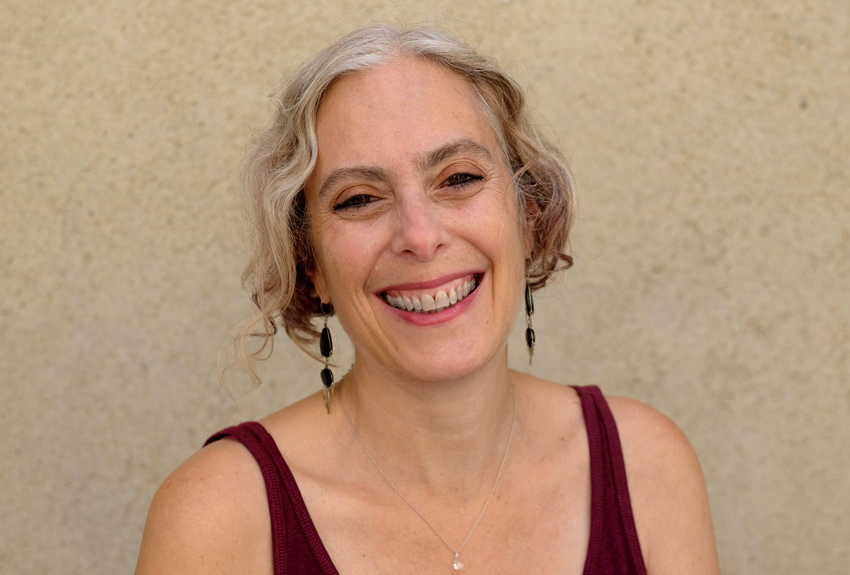 Where did you grow up?

I grew up on the Upper West Side of Manhattan. People that you meet in New York are often surprised to hear this because so many “New Yorkers”are transplants who arrived here from elsewhere as young people to strike out on their own. Also, I grew up in the seventies, and that was a whole different world. I was taking the subway to school by myself when I was in fourth grade. It was a strange, wonderful, and  somewhat dangerous landscape full of a true mix of people. I don’t think that many younger people nowadays can imagine such a childhood.

When I was fifteen, I briefly lived by myself in a tiny studio apartment in Chelsea (don’t ask, it’s a long story). Chelsea was a pretty seedy neighborhood back then, so I was kind of on the look-out for places where I could be in community without having to be too committed socially. I lived a few blocks away from the Sivananda Center on 24th street, and I used to pass by it daily. It always smelled like nag champa and curry. It was very inviting. You could see into the first floor of the brownstone from the street. Inside were interesting looking people, books, indian print fabrics, all things cool to a teenager in the seventies. After a while, I screwed up my courage and went in. I knew about yoga, but hadn’t ever tried it. The Sivananda practice is a very grounded, calming hatha practice, but also intense and disciplined in terms of pranayama and meditiation. Discipline and routine were exactly what was lacking in my home life, so it worked for me. I stayed with that practice on and off well into my mid-thirties when I met Peter Ferko, my now husband in 2000. He was practicing at Be Yoga (ISHTA’s precursor), and was a student of Alan Finger and of Jean Koerner at the time. When we were first dating, he would come with me to a Sivananda class and then we’d go for dinner. I’d ask him how he liked it, and he would hem and haw, which intrigued me. Eventually, he lured me over to ISHTA to try one of Jean’s classes. Then I went to Al’s meditation class, which at the time included asana after the meditation. It was like someone turned on a lightbulb inside me. I can’t explain it. I was home. It didn’t take me long to transition to ISHTA. Peter and I did the training together soon after and got married during our 300 hour training in early 2003.

How would you describe your class?

I like to create a safe space for people to explore the full range of their physical, mental, and emotional patterning, and from there to set the stage for them to experience the possibilith of what is beyond that patterning. I bring in philosophy as a way to create a container for this to happen. I think of myself as a guide and channel, rather than as an ‘instructor.’I am very methodical about alignment and like to give enough time for students to explore what’s really going on in their body. But I also spend equal time focusing on the dynamics of breath, kriya, and movement, whether in vinyasa or in floor work. I allow myself to respond to what is in the room, so sometimes my class is more strength-building, and sometimes more flowing. My class is called Move & Meditate (which I coined for the schedule a few years ago) because I think these two things should always go together. My sequencing is always geared to preparing for a pranayama technique and seated meditation at the end, leading right into a long savasana. My intention is to meet people wherever they are in their busy day and help them to leave feeling inspired by their own intimate connection to breath, body, and spirit. Hopefully, we get there most of the time.

What drew you to take the ISHTA training, and what about the ISHTA teachings inspires you now?

Peter and I started dating in the early spring of 2000, and I already had a plan in place to do the Sivananda teacher training. I was planning to spend the summer in Canada at their ashram with my then twelve-year-old son. As my relationship with Peter and with ISHTA grew, I decided to change course and didn’t go to Canada as planned. Pretty soon after, the opportunity for me and Peter both to do the 200 and 300 hour training as part of a work trade (Peter’s graphic design work!) came along. So surrendering to that course correction really worked out well for me. To sum up what inspires me about the ISHTA teachings is hard to do. We teach that there is a practice that resonates for each of us in our soul, no matter what kind of physical, mental, and emotional patterns we are dealing with. Through this practice, we each have the possibility and even I might say the responsibility to continue to grow and evolve. The tools of Hatha, Tantra, and Ayurveda are there for us to learn, to use, and to share.

I am particularly indebted to the standing hip openers (the warriors, trikonasana, lunges) because they taught me how to live productively with a significant case of hip dysplasia, which I was born with. But my favorite pose is Savasana. Hands down, for me it is not yoga if you do not spend time integrating in a neutral state. For years I worked full time as a program officer at a foundation while I also raised my child and did my yoga training and apprenticeship. During this period, I was known for doing savasana under my desk when we had deadlines or when things were particularly tense in the office. I did it to get me through the tough moments, but I saw that it was also inspiring and empowering for the staff. My boss was tolerant, but not terribly happy about it.

What do you find inspiring about being a trainer?

There is nothing more inspiring than helping to facilitate another human being’s growth process. You have to give away what you receive. This is the essence of the training for me.

What do you enjoy doing off the mat in your free time?

I take any opportunity I can to get my toes into the earth or a lake or the ocean. Except not during a polar vortex. I spend as much time as I can with my grandson, who turns two at the end of February. He is a Pisces, like me. It will not surprise anyone that I like to read about all of the wisdom traditions. Right now, I am reading the Sefer Yetzirah, a book of proto Kabbalah that was given to me by a rabbi who I met trying to learn about my Jewish roots. It was written around the 4th or 5th century CE. It has some incredibly interesting parallels with Tantra and with the Yoga Sutras.

Tell us about the Tantra of the Yoga Sutras, the book you wrote with Alan, and about the training you developed based on that work. (The first session of the training is coming up on February 9th!)

In 2011, I got a very early morning phone call from Alan on my birthday. He didn’t know it was my birthday, he just happened to have a vision at that moment. He said “Wens, I have a project for us, and I need to initiate you into yogiraj to do it.”He did, and we did the project —and it took a very long time! This past December, Tantra of the Yoga Sutras was published by Shambhala. It is based on Al’s vision of the Sutras as a work of Tantra, and on our years of processing and writing down that vision. The training will be in four modular five-hour sessions corresponding to the four padas of the Sutras. The first one is on Samadhi Pada this coming Saturday, February 9th! It will be in the style of what a student and colleague recently called “upanishadic”learning. We will deal with the text more actively and experientially than people might be used to. This is not a five hour lecture to be passively consumed. The training is based on the book, but also on the experience I had of growth and evolution from interacting in such an embodied way with this wisdom and with Alan, who is truly a contemporary master. I am also looking into formatting the training for on-llne learning. My intention is to make these profound teachings relatable and accessible to people in a way that positively affects their relationship with themselves, others, and their reason for being here.

What do students get from studying the philosophy of the Yoga Sutras in this way?

In a word, they get perspective. For me, this kind of learning inspires and activates the true healing nature of yoga, which is to show up, be present, and meet your karmic challenges. This is what brings joy in living. If my students are also teachers, this is an invaluable resource for them, because it creates a well of inspiration they can keep tapping into, keep filling up, and share with their own students.