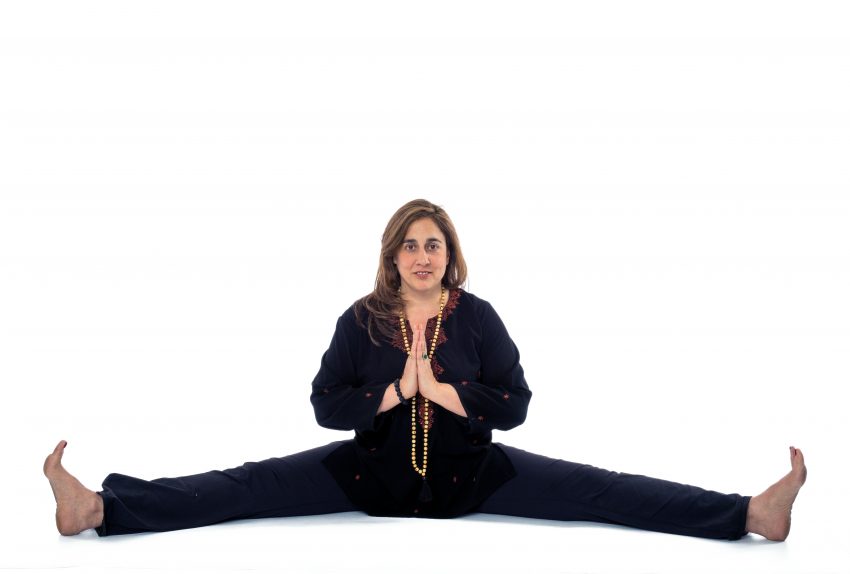 Below she shares how she came to the practice of Yoga Nidra and why she think’s it is so beneficial for the modern yogi.

I was first introduced to yoga nidra in Mumbai, India in my teens. I was a competitive athlete at the time and didn’t know how to stop and rest. Then I took my first Yoga nidra class and it took me to a place of deep inner stillness and peace that I had never experienced. I was hooked from the very first class! My teacher used to say that twenty minutes of yoga nidra was equivalent to four hours of sleep. My own experience with yoga nidra validates this  – I used this technique when I was sleep deprived in school, college, graduate school, or as a new mother and I could stay up all night studying orcalming a sleepless baby and with twenty minutes of yoga nidra feel completely refreshed.

Later in my life, after a bout of serious asthma attacks, I walked into my first yoga class in America. I loved everything about the class but when we lay down in savasana nothing happened. Where was the guided relaxation into stillness? I started taking restorative classes that gave me a similar experience and now I was hooked on restorative too.

Some time later I signed up for teacher training at Be Yoga and took over the kids yoga program. When my daughter had trouble falling asleep we flew around the world on a magic carpet. I now tried this technique with the kids in the program and it quickly became their favorite part of class.  Since children’s minds are uncluttered by the way things should be they step into an imaginary world with ease. The trips we took were magical for them and me and eventually made their way into my adult yoga nidra classes.

When I started teaching adults I included yoga nidra at the end of every class. Most students didn’t know what it was at the time but they kept coming back for more.  One of my fellow teachers advised me not to include yoga nidra in classes in New York City. They said students would get frustrated and leave because New Yorkers couldn’t slow down, but the opposite happened and people came back for more It’s exactly what we need in NYC but we often don’t know it.

So, when I started teaching workshops I decided to combine the two disciplines that I love, restorative and yoga nidra to create my Restorative/ Yoga Nidra Workshops which I’ve been teaching for the past twelve years. The two work so well together because restorative helps us deeply relax and yoga nidra take us deeper into the subconscious and unconscious releasing past experiences and inner tension that distort our reality.

This training is so powerful and transformational because we learn how to teach yoga nidra by directly experiencing and delving deeper into each of the nine steps of yoga nidra and in doing so release layers of inner tension that we’re unaware we’re holding.  It truly is a mini staycation – students walk away experiencing an inner stillness and peace they didn’t know was possible and that experience inspires them, as it has inspired me, to want to share this powerful technique with their friends, family and students.

What exactly is yoga nidra?

Yoga Nidra is a guided auditory meditation technique practiced lying down in savasana. In Sanskrit nidra means sleep. Yoga nidra is often referred to as the sleepless sleep because it induces a state between being awake and being asleep known as the hypnogogic state in which the mind and body deeply relax. This powerful state on the threshold of being asleep and being awake can be used for many purposes that include deep relaxation, releasing memories locked in the sub conscious and unconscious and creating an expanded state of consciousness

Yoga Nidra’s roots lie in an ancient tantric technique called nyasa in which practitioners held their awareness on different parts of the body and through concentration and the chanting of mantas were able to bring more consciousness to different parts of the body. We use a variation of nyasa in yoga nidra to move our awareness through the body in a particular order and create a circuit of energy through the brain that allows us to enter the hypnogogic state.

Yoga nidra is highly adaptable both in length and purpose.  It can range from just a few minutes to an hour long practice depending on the purpose and time available. Most practices are between fifteen minutes and forty minutes. In this training we will experience and learn how to teach all nine steps of yoga nidra and how to adapt the practice for different imbalances such as insomnia, depression and anxiety. We will also learn how to adapt yoga nidra for asana classes, restorative classes and how to create short, mid length and long yoga nidras. We will also look at how yoga nidra can be designed for dosha imbalances.

“I highly recommend Mona Anand’s ISHTA Yoga Nidra training to anyone who wants to learn more about this powerful practice. Mona’s knowledge of the science, energetics, and healing qualities of Yoga Nidra is incomparable to anyone else’s in the field. Her love & passion for yoga is only surpassed by her generosity of spirit. Learning from Mona is an absolute delight.”
~ Sarah Finger, Yogiraj, Managing Director ISHTA Yoga

” What a great training! Packed with well rounded information about Yoga Nidra. Fun, inspiring, and easy to incorporate into my teaching and my own practice. And FUN, did I mention fun?! Mona is a fantastic teacher. “
~ Mark Waterman, Massage Therapist, Marama Trainer, Yoga Teacher

“I am so grateful for having taken Mona’s Yoga Nidra training at ISHTA! I have a regular practice of yoga nidra, both when I take her classes and in my own practice. So, being able to delve more deeply into the practice was a gift for me. Mona’s training is immensely beneficial to yoga teachers, who want to incorporate yoga nidra in to our classes, as well as students who simply want to incorporate yoga nidra in to their own lives. In the training, we were given a lot of really helpful information on the individual steps that make up yoga nidra, as well as scientific reasons behind why and how it works. All fascinating! Also, Mona offers a lot of sequencing options as well as suggestions for shorter and longer practices. I was so happy to learn more about how to use yoga nidra in the context of energetic imbalances as well as therapeutic applications like PTSD, chronic pain, and emotional and sleep issues. We had lots of opportunities to practice on each other, which was so helpful. We also had daily yoga nidra practices, which allowed us to experience all we were learning first hand… Plus they were led by Mona, which is a treat unto itself. Mona manages to. weave all of this wonderful information together in a fun, practical, and very creative manner. Her brilliance in her knowledge of all these areas is so profoundly inspiring and her enthusiasm and presence are always a sheer delight. Thank you, Mona”
~ Dionyssia Fillios, ISHTA Yoga Teacher, RYT-500

“The Yoga Nidra Teacher Training is the most valuable speciality teacher training I have taken. As a yoga teacher, the tools offered by Mona Anand in this training have been very important in many parts of how I structure my classes, from how I bring my students into a state of focus and good feeling, to the final relaxation. My Yoga Nidra practice has transformed my life, I am able to calm down and sleep better, as well as be more present in daily life. I am so grateful that this training is offered.”
~ Jenny Bloom, ISHTA Yoga Teacher, RYT-500

“When the yoga nidra training was announced, I couldn’t sign up quickly enough. After having completed the 300hr ISHTA training with Mona as my mentor and having a taste of “Mona Anand’s ISHTA Yoga Nidra” technique as part of that training, I was eager to spend more time with both. The transmission of this work from Mona to her students is nothing short of magical. Her tremendous knowledge and insights of yoga coupled with her well-known humor is a potent combination. However, when the transmission is yoga nidra there is something almost other- wordly that occurs. Her passion for this work is in every word she speaks, whether one is being guided through a yoga nidra by her or is in the midst of learning this powerful technique from her. The class content was interesting and thorough and Mona creates a warm and engaging environment that allows for an even more satisfying learning experience.”
~ Tisha Ford, ISHTA Yoga Teacher, RYT-500