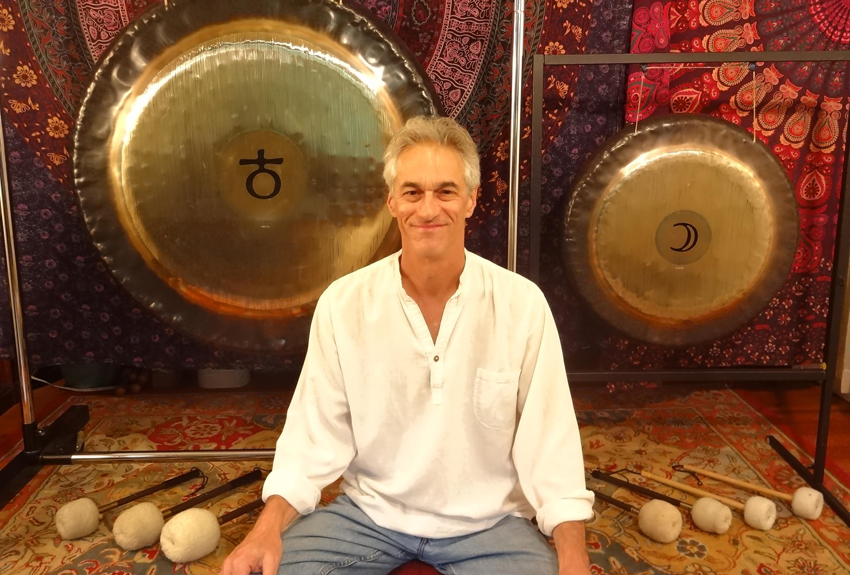 Join us at the time of the Summer Solstice for a special Earth Moon Gong Bath as we invoke and resonate with the planetary and solar energies of maximum Light.

In the quest to advance the art of the gong, Marco will pair the Earth Gong with the harmonically-matched Moon Gong. The effect is astonishing, creating new sonic vistas and new dimensions of consciousness.

The gong bath is an immersion in sacred and healing sound. Listeners typically experience a sense of connectedness and peace as the sound of the gong clears blockages and restores the free flow of vital energy throughout the body. With its ability to induce a spontaneous meditative state, the gong offers listeners access to parts of the mind that are usually closed, resulting in a sense of expanded awareness and higher consciousness. Gong sound can be used to rebalance and tone the physical, emotional, and spiritual bodies.

Not all gongs are alike! Planet gongs, made by Paiste, are master quality instruments. The Earth Gong is rare and magnificent, a large, 38-inch gong harmonically tuned to the vibration of the primordial AUM, the Universal Chord, the source of all vibrations, and to the fundamental vibration of Planet Earth as she revolves around the Sun. The Moon Gong, tuned to the sidereal Moon frequency, is the perfect complement to the grounding fundamental of the Earth Gong. Together they produce an incredible depth of frequency and harmonic complexity that is unmatched by any other gong combination.

If you have been a fan of Marco’s Earth Gong bath, you will love the Earth Moon gong bath!

Bio: Marco Dolce is an internationally acclaimed recording artist, musician, and sound healer. His original music for singing bowls and gongs, released under the name XUMANTRA, has touched the lives of tens of thousands of fans around the world, and is in use by yoga practitioners, alternative health practitioners, meditators, and spiritual seekers everywhere. Marco has been hailed by critics as a modern pioneer and master of the contemporary uses of these miraculous instruments.